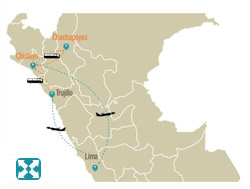 In the morning, guided sightseeing tour to the most attractive and important sites in Lima. The tour starts passing through the modern suburbs of San Isidro and Miraflores where we see the Financial Center, the Golf Course, the Olive Grove Park and the Huaca Pucllana, archaeological precinct built in the IV century A.D.  It was a ceremonial and administrative centre which was considered by the Incas as a sacred site.  The tour continues passing through the Historical Centre, with its colonial mansions and its Moorish style balconies, San Martin Square and the Main Square with their different buildings: Government Palace, Archbishop’s Palace, Cathedral Basilica and the Town hall. Then we visit San Francisco Convent, which displays the largest collection of religious colonial art in America, and where we can appreciate the great Patio decorated with Seville tiles from the XVI century, Moorish arches and underground catacombs.

Afternoon excursion to the Chan Chan archaeological complex, to visit the Temple del Arco Iris (Rainbow) or Huaca del Dragon and the Tschudi Palace, with its ceremonial squares, worship sites, reservoirs, barns, burial platform. The tour ends in Huanchaco fishermen’s cove, a traditional fishing port where you will see the ‘Caballitos de totora’ (old Mochica reed vessels). At agreed time, transfer to the station for bus trip to Chiclayo (regular service). Upon arrival, transfer to hotel.

We depart to visit the archaeological complex of Tucume, famous for its pyramids and terraces surrounding the mountains in a radial shape, and traditionally known as Purgatory or the Raya. We can watch 24 to 26 Pyramids. Then we go to Lambayeque, to visit the Royal Tombs Museum of Sipan (*), with 10 exhibit rooms, where we will see the treasures of the Lord of Sipan and a large collection of gold, silver and copper objects. We will pass by the Church of St. Peter, the longest balcony of Peru (La Casa de La Logia), the Main Square.

In the afternoon, we leave towards Huaca Rajada (**), 33kms Southeast of Chiclayo and 2kms from Sipan; the site where the intact tomb of an elite figure was found (Moche 200 to 700 DC) called the Lord of Sipan. The sumptuousness of their ornaments and the high degree of its cultural technological development is considered the most important archaeological discovery of the century.  We visit the Site Museum.

Hotel pick up service in Chiclayo and private transportation to Chachapoyas.  We enjoy beautiful panoramas on our trip to the unspoiled city of Chachapoyas.

Transfer to Cruz Pata (2.5 hours approx).  From there we walk to watch the 8-feet high funeral sarcophagus of Karajia (also known by the local as Purunmachus), located on a mountain cliff at about 2,600m (8530ft – 20 minutes downhill hike).  We continue with the route where we can observe from the road more than 20 discovered sarcophagi. In the afternoon, we are transferred to Choctamal Marvelous Spatuletail Lodge to stay overnight above the clouds, and where we can observe several hummingbirds. The lodge is located on the road to Kuelap at only 35 mins from the fortress.

We will spend the day at Kuelap Fortress known as “the Machu Picchu of the North”. Kuelap has over 400 buildings inside 3 levels of walls, and is the largest stone structure in all South America. Orchids and bromeliads cover the walls and trees inside this fortress. On the way to Chachapoyas we will observe the platforms of Macro located on a cliff overlooking the Utcubamba River.

Early departure to Chiclayo and transfer to the airport for your evening flight to Lima.