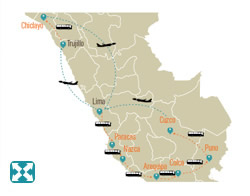 In the morning, guided sightseeing tour to the most attractive and important sites in Lima. The tour starts passing through the modern suburbs of San Isidro and Miraflores where we see the Financial Center, the Golf Course, the Olive Grove Park and the Huaca Pucllana, archaeological precinct built in the IV century A.D.  It was a ceremonial and administrative centre which was considered by the Incas as a sacred site.  The tour continues passing through the Historical Centre, with its colonial mansions and its Moorish style balconies, San Martin Square and the Main Square with their different buildings: Government Palace, Archbishop’s Palace, Cathedral Basilica and the Town hall. Then we visit San Francisco Convent, which displays the largest collection of religious colonial art in America, and where we can appreciate the great Patio decorated with Seville tiles from the XVI century, Moorish arches and underground catacombs.

(*) National Museum of Archaeology, Anthropology and History, closed on Mondays.

Afternoon excursion to the Chan Chan archaeological complex, to visit the Arco Iris Temple (Rainbow) or Huaca del Dragon and the Tschudi Palace, with its ceremonial squares, worship sites, reservoirs, barns, burial platform. The tour ends in Huanchaco fishermen’s cove, a traditional fishing port where you will see the ‘Caballitos de totora’ (old Mochica reed vessels). At agreed time, transfer to the station for bus trip to Chiclayo (regular service). Upon arrival, transfer to hotel.

We depart to visit the archaeological complex of Tucume, famous for its pyramids and terraces surrounding the mountains in a radial shape, and traditionally known as Purgatory or the Raya. We can watch 24 to 26 Pyramids. Then we go to Lambayeque, to visit the Royal Tombs Museum of Sipan (*), with 10 exhibit rooms, where we will see the treasures of the Lord of Sipan and a large collection of gold, silver and copper objects. We will pass by the Church of St. Peter, the longest balcony of Peru (La Casa de La Logia), the Main Square.

(*) The Royal Tombs Museum of Sipan is closed on Mondays.

In the morning, we leave towards Huaca Rajada (*), 33kms Southeast of Chiclayo and 2kms from Sipan; the site where the intact tomb of an elite figure was found (Moche 200 to 700 DC) called the Lord of Sipan. The sumptuousness of their ornaments and the high degree of its cultural technological development is considered the most important archaeological discovery of the century. We visit the Site Museum. At agreed time, transfer to the airport for our flight to Lima. Upon arrival, transfer to the hotel.

(*) Huaca Rajada is closed on Mondays.

Transfer to Maria Reiche aerodrome to fly over the mysterious Nasca Lines (aprox 30 mins); enormous line drawings of animals, birds and geometric figures, drawn on the desert, and can only be seen to full extent from the air. Then we visit the city, Cantalloc Aqueducts, the natural viewpoint of Cantalloc to watch the ‘Telar’ (loom) figure, Paredones (Inca administrative center), Antonini Museum and a pottery workshop. At agreed time, transfer to the station for the bus trip (regular service) to Arequipa. Upon arrival, transfer to the hotel.

We leave very early in the morning to the ‘Condor’s Cross’, from where we will have an impressive panoramic view of the Colca Canyon. We can also watch the majestic condor flying through the Andean sky. On the way back to Chivay we pass by typical towns. At 13:30 transfer to Puno on a tourist bus. Upon arrival, transfer to the hotel.

In the morning, motor boat excursion on the Lake Titicaca to the floating Uros Islands.  The ancient inhabitants have built their islands by periodically adding new layers of dry Totora (a kind of reed).  They also use this material to build their houses and boats. Our excursion continues to Taquile Island, inhabited by native Quechuas who have developed an efficient and original social system, and a magnificent textile technique.  Upon arrival, we will have lunch, and then we will walk throughout its hills and archaeological sites.  In the afternoon, return to Puno and transfer to the hotel.

Transfer to the station for the tourist bus trip to Cusco (aprox 9 hrs). During the trip we will visit the Kalasaya Temple, remnants of the ancient Pucara Culture. We pass by La Raya ranch (the highest point on the route – 14,222 ft), where we can see herds of vicunas and llamas. From there, we continue to Sicuani, where we will have lunch at a local restaurant. Then we stop at Racchi, where we will see an Inca Sanctuary dedicated to the great Inca god Wiracocha. Continuing our trip we arrive at Andahuaylillas, where we will visit its church, known as the ‘Sistine Chapel of the Americas’, due to its decorated polychrome ceiling. Upon arrival in Cusco, transfer to the hotel.

Morning at leisure. In the afternoon city tour, passing by the Main Square and the Cathedral, with its valuable paintings of the Colonial Cusco School, the famous Temple of the Sun or Koricancha, an ancient Inca temple over which the Santo Domingo Convent was built. Then we pass by the impressive ruins of Sacsayhuaman Fortress, Qenko, Puca Pucara and Tambomachay.

Pick up from your hotel for the full day excursion to the Sacred Valley of the Incas, where the best corn in the world is produced because of the richness of its land. We visit the town of Pisac, where we can enjoy the large variety of handicrafts (textiles and pottery) at the Indian Market held at the Main Square.

We continue through the towns of Ccoya, Lamay, Calca and Urubamba. After lunch, we visit the Inca Fortress and Citadel of Ollantaytambo, a large agricultural, administrative, social, religious and military complex in the times of Tahuantinsuyo. Return to Cusco.

Early in the morning, transfer to the train station for the trip to Machu Picchu Pueblo. The train journey passes by the Andes, parallel to the Urubamba River with the magnificent view of the High Jungle. From there we will ascend to the archaeological complex of the ‘Lost City of the Incas’, Machu Picchu, located on a high mountain covered by exuberant Amazon vegetation, with its rich fauna and flora. In the Historic Machu Picchu Sanctuary we can appreciate the mix of the impressive precision of its stone structures, which reveal the deep knowledge and the technological advance of the Inca Culture, with the mystical aspect of one of the most important archaeological sites of the world. After lunch, return to Cusco and transfer to the hotel.

At agreed time, transfer to the airport for your flight to Lima.